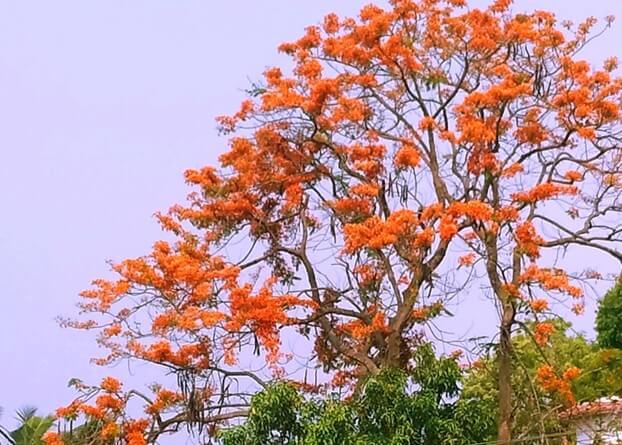 “The Greek word for “return” is nostos. Algos means “suffering.” So nostalgia is the suffering caused by an unappeased yearning to return.” ― Milan Kundera

We were in the heady days of spring in the West and Baishakh in India. There was a sprouting of green shoots everywhere one cared to look, an explosion of daffodils, blossoms and every vista was splashed with an exuberance of colour. The yoke of a seemingly never-ending COVID-19 pandemic was starting to lift. Although the numbers of ‘cases’ were surging like never before, much of the population had received their ‘jabs in arms’ and were bursting with immunity (to take words from Rt Hon B Johnson, Prime Minister of the UK). Therefore the legendary British grit and exceptionalism was at its peak. The Easter holidays arrived and every Tom, Dick and Harry (to quote from yore when the world was still defined by the purity of the Anglo-Saxon view) was packing their bags and heading for the sun, sea and sangria. This was the first time that much of the travel restrictions of the pandemic years had been eased and people were venturing out to savour their freedom. It was also a perfect time for many of the diaspora from the Indian subcontinent to head for the heat and dust of home.

We were no different and packed every minute of accumulated leave and packed the long, snaking lines at check in desks and immigration counters or at ferry ports. The previously enjoyed freedom of a visit to the continent as members of the European Union without any hindrance were of course no longer feasible but there was so much of unspent energy that such mere hurdles were ‘no bother’. India and the diasporic homelands were as welcoming as ever and RT-PCRs were consigned (perhaps temporarily) to history.

We decided to make this a ‘trip of a lifetime’, where we travel the trodden path and visit the places and people who cherish the memories of old times. Some clever clog has commented that it is not the places that have become old, but us. So it may be, but that does not take away from the fact that revisiting people and places we hold dear in our lives goes a long way to healing and I would even argue, ‘revitalising’ the soul. I am not sure what psychologists or philosophers will say about the human kind’s need to revisit old memories. Visiting places from earlier in our lives can retrieve memories that have not been recalled for many years. Such memories come back vividly and in detail.

Nostalgia is about close others (family members, friends, partners), momentous events (birthdays, anniversaries, vacations), and settings (sunsets, lakes). It is a self-relevant emotion (as the self is invariably the central character in the narratives) but also a social emotion (as the self is almost always surrounded by close others). It is also bittersweet, albeit mostly positive. And it is triggered typically by aversive conditions, such as negative affect or loneliness. Importantly, nostalgia, once evoked, re-establishes psychological equanimity. It elevates mood, self-esteem, and a sense of social connectedness; it fosters perceptions of continuity between past and present; it increases meaning in life; and it “fights off” death cognitions. Nostalgia has motivational consequences, as it facilitates approach-oriented (e.g., prosocial) behaviour. The perception of nostalgia is universal and tends to feature the self as the protagonist surrounded by close friends. Most people report experiencing nostalgia at least once a week, and nearly half experience it three to four times a week. As people get older, nostalgia makes them feel youthful and energetic but this feeling is also experienced by children as young a 7 years.

A study published in the journal Science suggests that synapses between engram cells are believed to be substrates for memory storage, and the weakening or loss of these synapses leads to the forgetting of related memories. Engulfment of synaptic components by microglia in the hippocampi of healthy adult mice, is predictably driven by the frequency of use. Hence, the authors conclude that revisiting or refreshing old memories is an important factor in preventing decay.

What then may be the greater purpose of preserving and refreshing old memories?

There are ways of thinking about the past that aren’t just nostalgia or regret. A kind of questioning that enriches an experience after the fact. To dwell on the past is to allow fresh context to trickle in over the years, and fill out the picture; to keep the memory alive, and not just as a caricature of itself. So you can look fairly at a painful experience, and call it by its name. Time is a most powerful force. It can turn a giant into someone utterly human, just trying to make their way through. Or tell you how you really felt about someone, even if you couldn’t at the time. It can put your childhood dreams in context with adult burdens or turn a universal consensus into an embarrassing fad. It can expose cracks in a relationship that once seemed perfect. Or keep a friendship going by thoughts alone, even if you’ll never see them again. It can flip your greatest shame into the source of your greatest power, or turn a jolt of pride into something petty, done for the wrong reasons, or make what felt like the end of the world look like a natural part of life.

We did all of that and more. Visited the places of scratched knees and broken hearts. We had our rose-tinted glasses on, the closed gates of the school, the running track where one got to a heady finish after a 1500m race (but did not win), the library where the heart fluttered as one reached for a book and handed it out to the shyly outstretched hand of an angel (it didn’t get us anywhere), the window from where one gazed on the sun-kissed countenance of one who forever remained oblivious to the storm that raged in one’s young bosom. The past is still mostly a blank page, so we may be doomed to repeat it. But it’s still worth looking into if it brings you closer to the truth. Maybe it’s not so bad to dwell in the past, and muddle in the memories, to stem the simplification of time, and put some craft back into it.

As important as it is to create memories or shared experiences together as a couple, friends or with your family, it is perhaps more important to pass down your memories. It is an age-old tradition to pass down family heirlooms, whether that is by leaving money in a will, keeping an engagement ring in the family for the next happy couple, or gifting your children with your “family secret” recipes. Reflect on any valued and positive memories that you may have experienced in your own life or with members of the previous generation or with grandparents, such as an excursion, a camping trip or a meal together, or simply sharing a story of yesteryears.  Children at an early age typically struggle to place themselves at the centre of a life story, to do the kind of time-travelling that makes autobiographical memory possible. As their skills with language, narrative and social understanding improve, so too does their aptitude for telling the story of their own lives. Hence shared memories provide stability, a sense of belonging to a long tradition, cherished heritage and much emotional advantage to those who are still young and early in their life-cycle.

Memories are a living, dynamic entity which is always being negotiated, fought over and shaped by the memories of others. But memory is not just about individual selves. We are always part of a remembering team. No single person is making the memory, although many individuals in relationships contribute and get busy constructing shared representations of the past. Disagreements in co-remembering may be smoothed out by a more powerful imperative to share a story. When relationships fail, those negotiations can also collapse. We see the results of this between warring nations which were once part of a nation or when families or friends fall out. Often entire societies go in for this kind of negotiation. Memory collaborations thus can have both positive and negative effects. Other people’s influence can diminish the accuracy of our memories, and groups of people sometimes remember things less effectively than the individuals, working separately, would have done. To say that we “remember” such events is not to misuse the term. Collective memory has an extraordinary power, and it stems from the collaborative, reconstructive nature of memory itself. Can we learn from the past?

“Will this generation be able to turn things around and learn a valuable lesson from all of this? I hope so, but I have my doubts. The damage has been done. And as a lifelong student of history, it’s quite evident that human beings don’t learn from the mistakes of past generations.”