Blog – Run with the wind in your hair 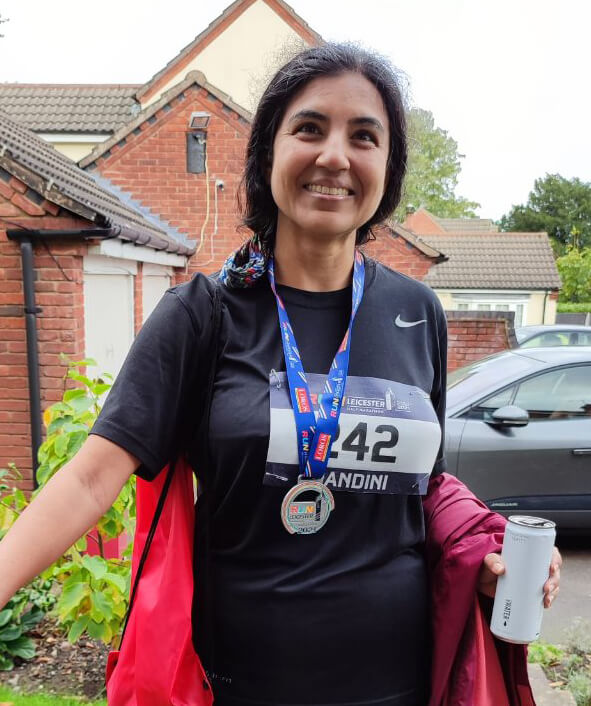 The rain was chucking down like a giant cold shower turned on at full volume. The few thousands of people lined up in a broad vein in Leicester’s Victoria Park behind the magnificent Remembrance Arch, sports t-shirts, leggings and running shoes primed, were jogging around to warm up for the coming race. The crowd shivered both in the cold and in anticipation. It was time for the Leicester half-marathon 31st October 2021.

I took my place somewhere between 2 hours 30 minutes and above in the line. A woman beside me was accompanied by her three young kids and husband who had come to see her off. ‘It’s my first half-marathon’, she said nervously. ‘You’ll be fine,’ I reassured her. Just as I had been reassured by kind people, on my first race in 2018.

I have always been an avid walker. Walking and hiking have been a passion for years. My 40th birthday gift to myself was a Kilimanjaro hike with a family friend. The next year I did Mt. Kenya with my 12-year-old daughter and the following year we did the classic Inca trail. Via Dinarica, Rwenzori mountains, Wadi Mujib, Wadi Dana, Scafell Pike and Ben Nevis gradually added to my hiker’s resume.

In 2018 a friend ran the London Marathon. A thought started forming at the back of my mind but running for hours was still a daunting prospect. It was on a random google search for long walks around the neighbourhood that I accidentally chanced upon Leicester marathon/half-marathon which started and ended a stone’s throw from where I live- Victoria Park.

It was July 2018- the run was due on the 14th of October 2018. I thought about it for a week and then went out running in Victoria park on a Saturday morning to test the waters. I walked and ran for over an hour to see how much I could sustain. I limped back home with aching muscles at the end of it and made up my mind- I registered for the half-marathon that afternoon.

Over the next 10 weeks, I ran randomly- most days of the week with no clear idea of how far I was running or how fast. My only prayer on the day of the run was that I should not be picked up by the ‘mop up vehicle’ that swept the route for struggling runners at the end of the time. I ultimately ran it in 2 hours and 48 minutes. My muscles were in a permanent state of cramped pain for a fortnight.

2019 passed in a blur and the run was cancelled due to rains and flooding. In March 2020 we went into lockdown. I started running in earnest. There was time on the days I was working from home. I downloaded the Strava app, discovered other routes around home. By end of May I was running an average of 35 km a week, a 10k on most weekends.

In September 2020, my daughter and I ran a DIY half-marathon around Rutland Waters on a beautiful end of summer/beginning of autumn day. I was quarantining for a fortnight before the run and practised in circles in my back garden, boring but effective.

With a winter break, I restarted regular running around April 2021 and was pleasantly surprised to find that my stamina was fairly sustained. And then, Leicester half-marathon was announced. We were back on the track.

The Leicester marathon/half-marathon is jinxed! I had run in rain in 2018, saw it cancelled due to flooding in 2019. In 2020 as we stood there and the organisers announced a delay- the only thought I had was-do not cancel, please do not cancel.

9:25 am, a shot and the line surged forward. The run starts in a steady downhill through London Road past the railway station, through city centre, the Golden Mile, Thurmaston and then the half-way mark in Watermead Park. I found myself enjoying the start a lot more than in 2018, I found myself overtaking others at the back of the line- this felt good! Kind Leicester people were out on the roads cheering us on, even in the rain.

Once past the half-way mark, I breathed easier. The route was coming back to memory. Out of Watermead Park, past Birstall where a little boy fed us sweeties (same as he had done in 2018), and then we turned towards Leicester again. First a few twists through Abbey Park and then right out in city centre, through the underground passages and then the home stretch- a steep uphill through the iconic New Walks area with its museums.

Through the finishing line for the second time in my life- this felt really really good.

Five years ago, if anyone had told me that I would be running half-marathons, I would have laughed them off. I never won prizes on school sports day and was my PE teachers’ absolute nightmare. My final words would be- never say never. If I can do this, absolutely anyone can. The tip is regularity and consistency. Once you feel the air rushing through your hair, brushing your face as your feet fly over the roads, the endorphins coursing through your body- running becomes something to look forward to at the end of a busy day.