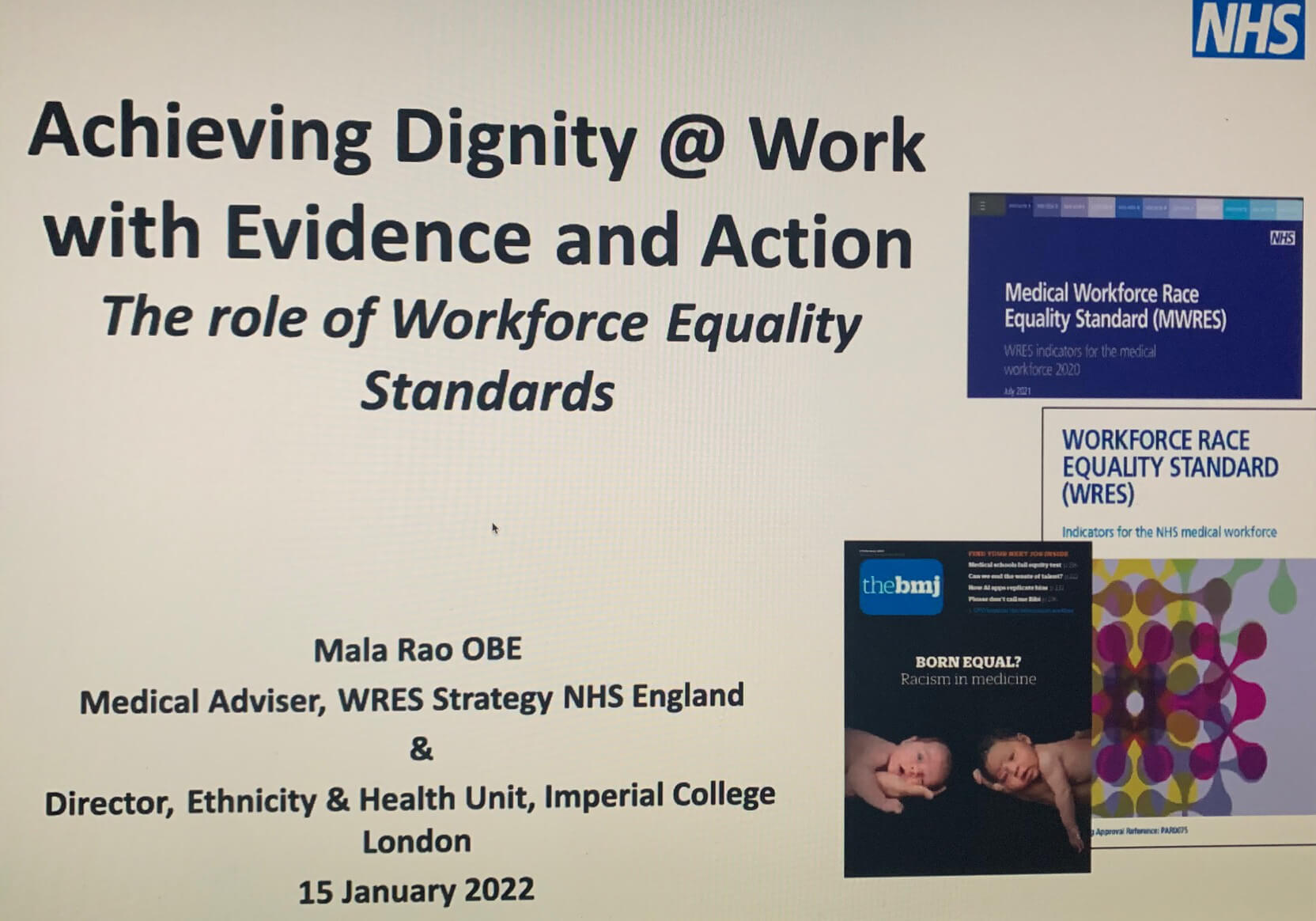 The first ever, ground-breaking conference dedicated exclusively to the cause of promoting dignity in the healthcare workplace was planned to bring together national experts, stakeholders and the frontline, multiprofessional workforce to the haloed setting of Keele Hall on 15 January, 2022. The Alliance for Equality in Health Professions set up by BAPIO in 2020, took the initiative in the face of rising concerns of stress, burnout, reports of deteriorating behaviours and demoralisation across the stretched healthcare organisations. There is an imminent and emerging crisis of staff sickness, mental and physical health decline and a huge risk to recruitment and retention of crucial workforce. A situation further complicated by the mandatory vaccination as a condition of employment law, recently passed by the UK Parliament.

A survey conducted jointly by BAPIO and a Midlands Trust reported exceptionally high numbers of medical staff experiencing bullying and undermining behaviours and working in an atmosphere of discrimination and fear. BAPIO and its Alliance partners decided to turn this growing surge of negative energy into a positive initiative. Recognising that years of policies to tackle bullying and zero tolerance proclamations had amounted to nothing and the annual WRES indicators continued to demonstrate that 1 in 3 healthcare workers reported experiencing or witnessing bullying, unfairness and incivility. It was clear that many in the healthcare profession, who had several of the protected characteristics experienced much higher rates of bullying and discrimination such as women, Black Asian and Minority ethnic groups, LGBTQ+  and those with disabilities.

BAPIO commissioned the BAPIO Institute for Health Research to undertake a literature review and develop a set of standards to promote a positive culture of Dignity and Respect in the workplace. These would be the first of its kind and the ambition was that where policies have failed to be effective, a set of consensus standards would energise all stakeholders to seek to achieve a culture change.

However, Omicron had other plans with the post-Christmas rapid rise of COVID19 case numbers. As the country moved swiftly into Plan B measures and the NHS actioned its contingency plans of setting up field hospitals- the organisers led by Dr Cherian George and Dr Biju Simon decided to change from a physical to a virtual event.

This virtual conference started off with a welcome by Ramesh Mehta, the visionary President of BAPIO, an overview of the standards presented by Professor Chakravorty was followed by a keynote speech by Roger Kline, who has been the mastermind of much of the research and recommendations in debunking bias, racism and discrimination. Roger confirmed the eye watering prevalence of bullying and harassment as well as incivility in the healthcare sector and the cost to the NHS simply from absenteeism to be nearly £3 billion. What was more worrying was the impact of bullying not only on the victim, but also the silent bystander, the deterioration in performance of the team and the decline in empathy and caring towards each other as well as patients.

Professor Stephen Powis, National Medical Director of NHS England thanked all healthcare workers for their huge dedication and contribution to the COVID19 pandemic efforts, recognised the need for diversity and inclusion and extolled the virtues of compassionate leadership, which not only represented the diversity of the workforce but also were themselves exemplars and role models of the NHS values. He talked of the NHS England’s talent pool for future leaders, a scheme that he had personally spearheaded and held promise of a brighter future.

Throughout the day, in plenary sessions, panel discussions and workshops, the delegates from across the country and the multiple professional groups discussed and debated the tenets of the Dignity at Workplace standards document. Numerous examples of good practice were shared by representatives from the General Medical Council, the Nursing and Midwifery Council, the Care Quality Commission, Medical Royal Colleges, NHS Trust CEOs, Chairs and senior leaders. The delegates heard from Alliance partners, APPNE, MANSAG, BINA, BIMA, APNA, BMA and NHS Race and Health Observatory. Experts from the Workforce Race Equality Standards Group, Advance HE, University of Hertfordshire, St George’s University Hospitals, University Hospitals of Midlands, Wigan and Hull presented their ideas for implementation. 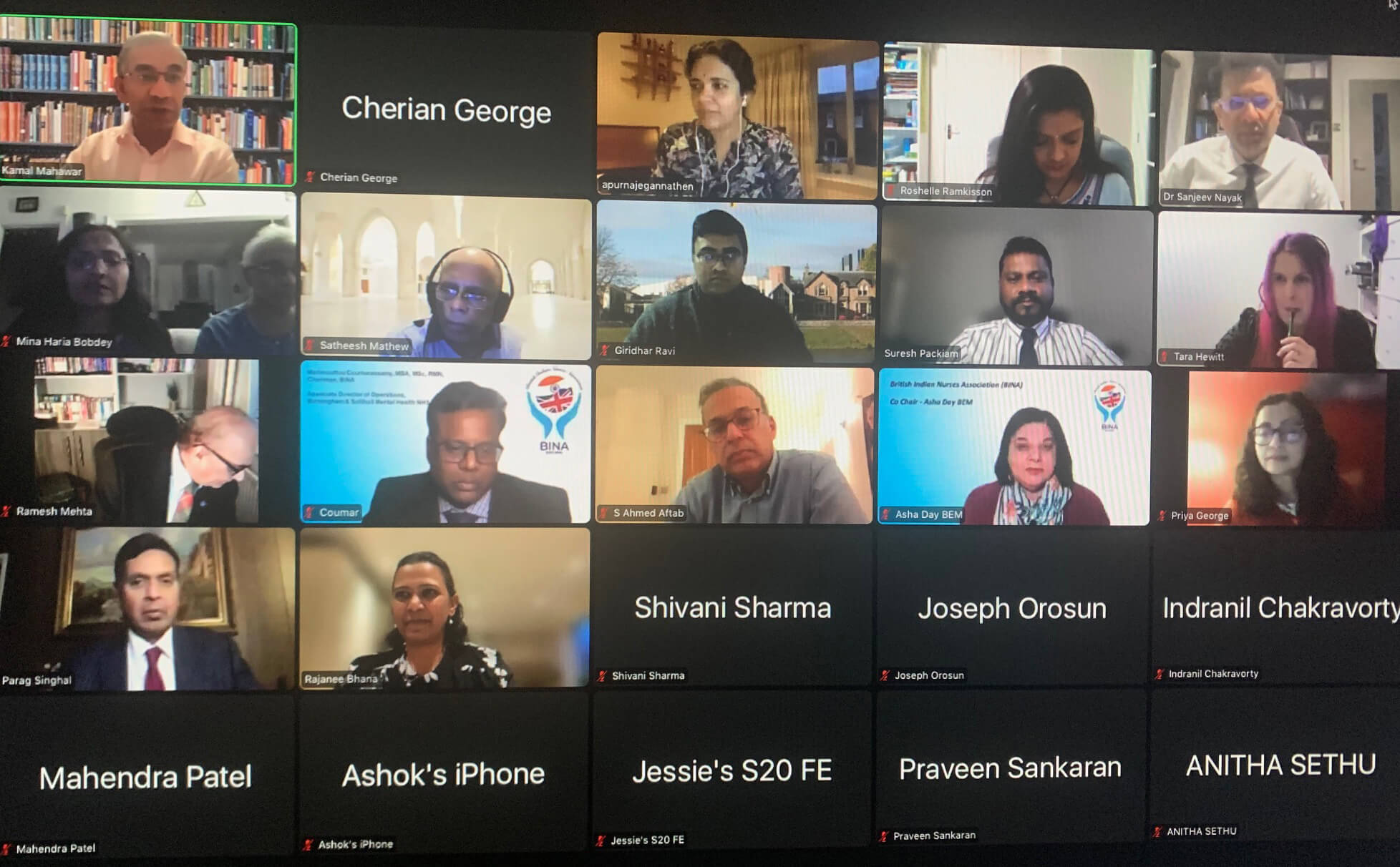 Finally, Martin Fischer brought the experts together in a Big Room Discussion on delivering the Standards and asked each and every member attending the conference to start immediately with acts of kindness, cultural humility and respect to colleagues. The conference agreed on the consensus for seeking to start the culture change from the top leaders in the organisation, to set values together with their staff, to be role models, to be empowered to be brave and live to the high ideals, to recognise the impact of intersectionality, of bias, of discrimination, of exclusion and start the process of healing, of being proactive and nip in the bud – early signs of deterioration in behaviour and seek a fair but informal resolution first, refer or escalate only when all informal actions have failed and be cognizant of the disproportinality of escalation for BAME and other minoritized groups.

Overall, there was energy, enthusiasm, engagement and a conviction to implement and deliver the standards across the healthcare sector. The final version of the standards will be circulated to the delegates by the end of January and are due to be published in mid-late February. If you are interested to contribute or take on the next steps, please contact admin@bapio.co.uk or chair.bihr@bapio.co.uk. The draft standards document can be found here.