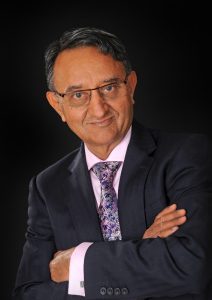 Dr Shah, who has been working in the NHS for almost 43 years, has devoted his life to helping those from a significantly deprived area of Wales. He is the honorary secretary of the Welsh Division of British Association of Physicians of Indian origin. He has been one of the most active BAPIO members and has contributed significantly to BAPIO work in Wales.

“I am truly humbled by this recognition and would like to dedicate this to my family, all my friends, colleagues and co-workers who help me in achieving so much for charitable causes,” Shah said on receiving the honour.
Dr Shah is trustee of Sanatan Dharma Mandal &Hindu Community Centre Cardiff, Welsh Hearts, Race Council Cymru and The Mentor Ring, as well as being the chair for the Minor Ethnic Association for Ophthalmic Care (MEGAFOCUS) group.

His charity, however, does not stop at the UK but also extends to overseas deserving causes, and he has raised funds for school projects in India and orphan project in Africa.

Dr Shah was awarded visiting Fellowship by the University of South Wales in April,2017 for his long standing medical professional work, education and charitable work to people of Wales.