Just as the second pandemic abated in UK and there was an air of  optimism with restaurants and theatres opening. We here in UK had just about started seeing light at the end of the tunnel. The Indian second wave of Pandemic struck with such intense effect.  The underbelly of India’s poor health care  coupled with the lack of infrastructure lay exposed with images of choked hospitals, empty oxygen canisters, parking lots converted to crematoriums and bodies floating on holy rivers. The Apocalypse unravelling left people feeling numbed and helpless.

Isaac Newton once said “he has seen further by standing on the shoulders of giants”. We at BAPIO experienced this in the response we had  from our  senior leadership  who proved their mettle by agility of their response in working closely with medical students, trainees, doctors of all levels in galvanising and organising targeted support to India with military precision. A BAPIO India Covid Fund was set up in collaboration with DAUK, APNA NHS, BINA and Akshaya Patra. A three dimensional strategy was planned.

The first being sourcing vital equipments, ensuring credible distribution to hospitals in India where the need was identified. To date three consignments have been deployed to India. 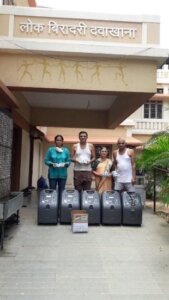 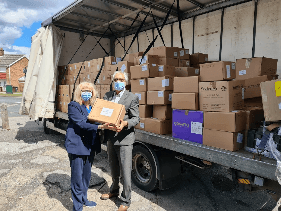 The second stream is providing Food. Maslow’s hierarchy of needs highlights the importance of universal and physiological needs as the core necessity and indeed, in crisis medicine this is what needs to be addressed first. BAPIO has teamed with Askhaya  Patra and other charities to deliver food to underprivileged or disadvantaged populations in India.

The third stream of help was in setting up Telemedicine under the aegis of esteemed Professor Singhal. This involve following categories-

BAPIO is mindful and respectful of endeavours of people to raise money either  by organising  curry parties, city bankers donating  money, or  man on street – giving up his/her cup of coffee to donate few pounds towards the humanitarian effort is all important.  Every little helps  and needs to be accounted for. In that BAPIO  have, ensured transparency of the funds collected and spent by regular updates and breakdown of costs.