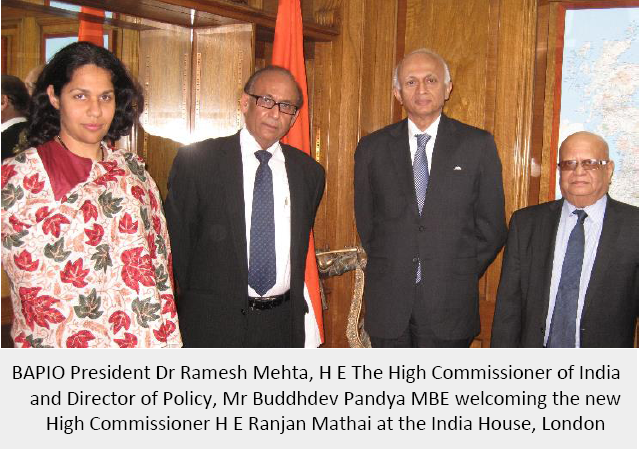 British Association of Physicians of Indian Origin (BAPIO), one of the largest Indian doctor’s organisation in the country welcomed the new Indian High Commissioner to UK, H.E. Sri Ranjan Mathai.

BAPIO extended a warm welcome to the new Indian High Commissioner, H.E. Sri Ranjan Mathai as he assumed the new appointment in London.

The President of BAPIO, Dr Ramesh Mehta along with the Director of Policies Mr Buddhdev Pandya MBE met His Excellency at the India House, London, to update on the progress of the organisation.

In welcoming Sri Mathai, Dr Mehta thanked him for the support he had given to BAPIO during his previous stint as the Deputy High Commissioner to the UK.

Dr Mehta extended an invitation to Sri Mathai on behalf of the BAPIO Executive to be the Guest of Honour at the Annual Conference & Awards Dinner to be held on 29th November 2014 in Manchester. “We are grateful to His Excellency for kindly accepting the invitation”, said Dr Mehta.

The President explained the campaign initiated by BAPIO in relation to the differential pass rates in the Clinical Skills Assessment (CSA) of the MRCGP.