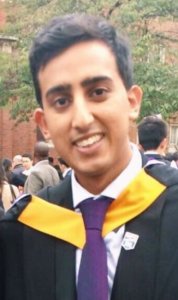 I am sincerely honoured and humbled to be the recipient of the BAPIO Research and Innovation Prize, 2017.  This provided me with an amazing opportunity to travel to Mumbai and present my paper on ‘The Association of Low Penetrance Variants in DNA Repair Genes with Colorectal Cancer’ at an international conference, and attend a weeks’ attachment in the busy emergency department of the Sion Municipal Hospital (incidentally, this is the same hospital which removed the heaviest ever kidney tumour 5.5kg, from a 28 year old woman, in November 2016).

The conference itself was truly an eye-opening event, clearly evidencing the intellectual, technical and dynamic strength of the global diaspora of physicians of an Indian origin working both in India and worldwide.  The diverse and progressive group of speakers and panellists provided in depth insights to achieve professional and clinical excellence, as well as highlighting the specific challenges and obstacles facing healthcare, health awareness and health equality in a continually evolving profession.

Following the conference, I started a weeks’ attachment at the Lokmanya Tilak Municipal General Hospital (known locally as ‘Sion Hospital.’)  As I entered the emergency department of Sion, I was immediately struck by the high volume of patients, compounded by a clear lack of resources and staffing.  I was shadowing a doctor who, amidst the organised chaos, was busy examining one patient and at the same time, comfortably taking a brief history from a second.  Confidentiality was deficient, but that didn’t seem to deter the ever-increasing queue of patients.  Indian healthcare is, undoubtedly, at par with international standards, but the individual right to privacy is perhaps still evolving, complicated by the pragmatic application of privacy protection in a department swamped with patients.  The initial consultation for any patient was relatively fast, and medical histories were taken very swiftly, often within two minutes.  To witness the doctors and nurses working with such efficiency, accuracy and palpable vigour, under surmounting pressure, was incredible.

Plagued with an inherent shortage of resources, however, the department faced many problems, least of all the use of aseptic techniques.  I was somewhat taken aback as a nurse inserted a urinary catheter into a patient and collected bloods without the use of gloves or any aseptic procedures.  Secondly, following triage, mobilising a theatre for surgery, should this be necessary, can take many hours.  This was quite hard to see as a patient with a major facial trauma following a railway accident was being photographed, somewhat insensitively, by a police officer as he waited in the corridor for a surgeon to attend to him, while another patient waited for a Hartmann’s Procedure.  Nevertheless, I was informed that hospitals such as the Sion offer world class health treatments with procedures such as Hartmann’s procedure, at a fraction of the cost of hospitals in Western countries.

My week at the Sion showed me how staff at the emergency department were able to do their work so competently, efficiently and, above all, with such a positive attitude, in spite of, or perhaps because of the challenges they were faced with. It was both heart-warming and astonishing.

I would again like to express my sincere thanks to BAPIO and especially Dr Ramesh Mehta for providing me with an unforgettable and unparalleled learning and life experience.