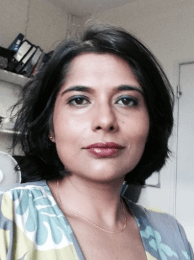 Subarna undertook her undergraduate medical training in Calcutta University, India, where she developed an interest in paediatric haemoglobin disorders. She trained in core paediatrics in the Midlands and specialist clinical haematology in London. She was awarded a PhD for her work in Familial Haemophagocytic Syndrome by Imperial College London in 2011. In 2010 she was appointed consultant in Paediatric Haematology and Bone Marrow Transplant in Imperial College Healthcare NHS Trust where she founded the Imperial Paediatric Red Cell Disorders Network. She moved to King’s College Hospital in 2015 as consultant in Paediatric Haematology and Haemoglobinopathy.

Subarna is the National Lead for the programme of Haemoglobinopathy Peer Review 2018-2020 and also chairs the London Haemoglobinopathy Commissioning Forum. She is an elected Trustee of the British Society for Haematology (2019-2021) and an elected trustee of the UK Forum on Haemoglobin Disorders (2019-2021). She is also a clinical lead of the South East London Haemoglobinopathy Coordination Centre. Subarna advises the National Cord Blood Bank for altruistically donated cord blood samples. She is a member of the Standards Working Group for the UK Paediatric Sickle Cell Standards, 3rd edition, 2020. Subarna has set up the South London Paediatric Bone Marrow Failure service at King’s College Hospital.

Subarna’s research interest is in clinical and molecular non-malignant haematological disorders. She leads and assists in several Phase II-IV trials in Sickle Cell Disease in King’s College Hospital. She led a successful national collaborative project in Sickle Cell Disease which in 2018 led to the development of a validated Patient Experience tool, the only one of its kind globally. She is one of the founder members of the BAPIO Academy of Health Research. She has presented her research and has delivered invited lectures in several national and international academic conferences.