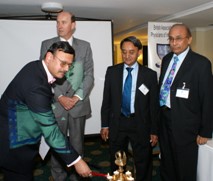 The BAPIO Welsh division is one of the most active divisions in UK. This was initially launched in 2004, and then revived in 2010 under the leadership of Mr. Keshav Singhal and Dr. Hasmukh Shah in 2010. Since then the division has gone from strength to strength and has held three highly successful annual conferences with attendances exceeding 200 each time.

The annual conference of 2012 was an oversubscribed event. The First Minister of Wales Rt. Hon Carwyn Jones was the Chief Guest and Mr. David Sissling, the Director General of Health Services of Wales was the Keynote Speaker. Speaking at the Banquet, Mr. Jones congratulated the Indian doctors on their long service to the Welsh people and hoped that the Indian doctors will continue to succeed in their chosen field and chosen country and provide sterling service to the Welsh NHS.

Dr Ramesh Mehta, President of BAPIO also congratulated the organising committee for a superbly organised and very successful conference and pointed out that last year the best division award went to the welsh division.

Mr. Keshav Singhal and Dr Hasmukh Shah spelt out their vision for the Welsh division and mentioned that they would act as a lobby group for Indian doctors and provide mentoring and networking opportunities to their members, in addition to supporting doctors in difficulty. They would also work constructively with NHS Wales in bringing cost effectiveness and savings for the NHS