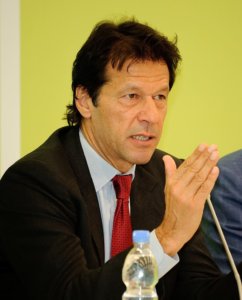 BAPIO President Dr Ramesh Mehta congratulated Mr Imran Khan who was sworn in as Pakistan Prime Minister on 18 August 18. He was guest of Honour at the BAPIO Annual Conference in 2011 at Birmingham.

Dr Mehta said “Imran is known to be a passionate, sincere and honest sportsman turned politician. As our guest at Birmingham I had said to him ‘Hope to see you as PM of Pakistan’. I hope he will be instrumental in bringing peace in Indian Subcontinent”

“History in The Making: After 22 years of relentless struggle for justice, equality and rights of the commoners of this country has culminated today. The Hope of Millions, the People’s Man Imran Khan has sworn in as the Prime Minister of Pakistan” from Pakistan Tehreek-e-Insaf